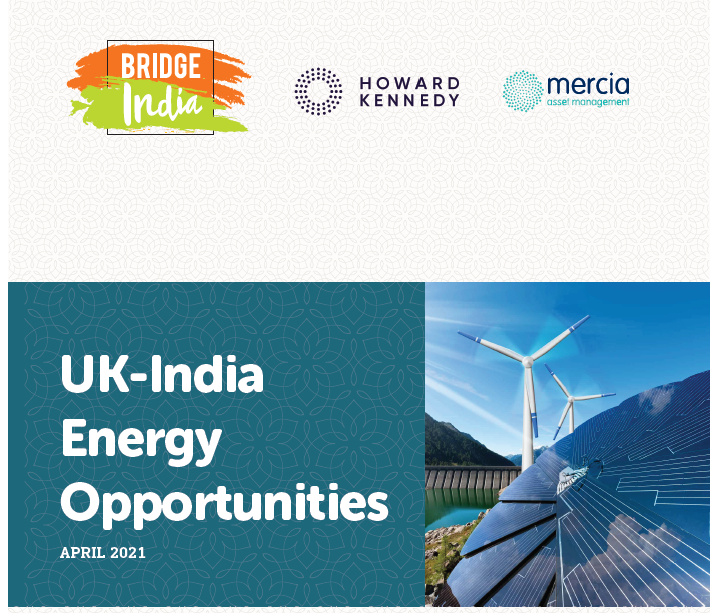 Bridge India is proud to introduce this review of UK-India energy opportunities. Its launch is timely, as the UK will be hosting the COP-26 meeting in Glasgow in November 2021. Across the world, governments face a litany of issues to resolve, including the twin challenge of tackling climate change and re-starting the economy following the disruption of COVID-19.

The UK’s ambitions on energy transition are world-leading. In 2019, it became the first G7 country to legislate for net-zero emissions, with a more than 40% cut to emissions since 1990, the fastest rate in the G7. This has been followed up with a ten-point plan for a green industrial revolution and a policy white paper.

“The biggest challenge of our time is climate change and we need to work together to deliver a cleaner, greener world and build back better for present and future generations.”

Likewise, India, which has a vast population, a fast-growing economy and is the world’s third-largest energy consumer, is in the middle of the world’s largest expansion of renewable energy, with strong impetus from the Modi administration.

Climate change is especially important for India’s clean energy ambitions, where rapid urbanisation and industrialisation are being accompanied by increasing carbon emissions.

Bridge India engaged with key stakeholders in energy related sectors in both countries. One conclusion from our conversations is that the energy transition challenges facing India are even more daunting – and the opportunities no less exciting. Whether supporting the UK’s ambitions or driving India’s own green agenda, the potential mutual benefit is immense.

Key areas of interest identified include the hydrogen economy, battery technology, electric vehicles, power grid development and project financing, where collaboration between the two economies can set a global standard.

This report is produced in conjunction with Howard Kennedy and Mercia Asset Management.