India’s national identity has been built on unity in diversity, which is often missing from discussions about the ‘India Story’ abroad. Bridge India aims to fill this gap.

India’s national identity has been built on unity in diversity, and it has long celebrated the commonality of major differences amongst its people. It offers many truths, each of which give shape and substance to the idea of India.

But the ‘India Story’ abroad is often presented through a narrow lens, be it focusing only on business and the economy, society or policy landscape. Given its diversity, everything about India, and its polar opposite, is true in unison. Bridge India seeks to highlight and celebrate this nuance, to help India-watchers understand India better.

“I want to influence my children to have a connection with India, but can that be if I myself do not have one?”

India’s diaspora is one of the most successful globally. With prosperity and successful integration into their host communities, comes a longing for some younger diaspora in particular, to connect with their ancestral land. The connections they seek with a contemporary India are cultural, social, linguistic, religious and business.

But their idea of India is one coloured by the stylised view proffered by Bollywood, raucous 24-hour Indian news channels and their parents’ idea of the India from their childhood.

These diaspora wish to connect back, or contribute to the India they see, but may not know how.

Bridge India seeks to facilitate interaction, debate and access for these diaspora to help them  understand India better through accessible content, research and visits.

The organisation will champion a progressive outlook. We will seek to proactively present a vision and narrative for engagement with India that engages young diaspora, policy makers, and other India-watchers through events, research and new media.

We know we have an ambitious agenda ahead of us, but we intend to meet it though publishing insights, analyses and opinions in print and online; conduct research especially on topics that matter for Indian diaspora, and for public diplomacy in terms of economic, diplomatic and cultural relations with India, with a focus on topics not covered elsewhere, and which champion a progressive outlook; convene seminars, roundtables and conferences to promote the vision; produce bitesize clips of content for social media, to target young diaspora and build a engaged and informed membership; engage academics and policy-makers on research and evidence-based analysis of the India-UK relationship; and embrace different opinions and debate within an overarching progressive agenda.

Our team has considerable experience in the charity sector in England and Wales, and aim to bring that to Bridge India, in order to make it into a sustainable and well-governed organisation. Just as India’s national identity has been built on a unity in diversity, Bridge India’s team reflects this.

We are at the start of a long journey, but one that we hope will be enriching as well as one that helps people of different communities understand and immerse themselves in an authentic India Story. 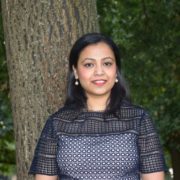 Neha is a finance professional, working at an international investment bank. She is also heavily involved in the not-for-profit space and is a trustee of the London chapter of a global charity called Asha for Education.