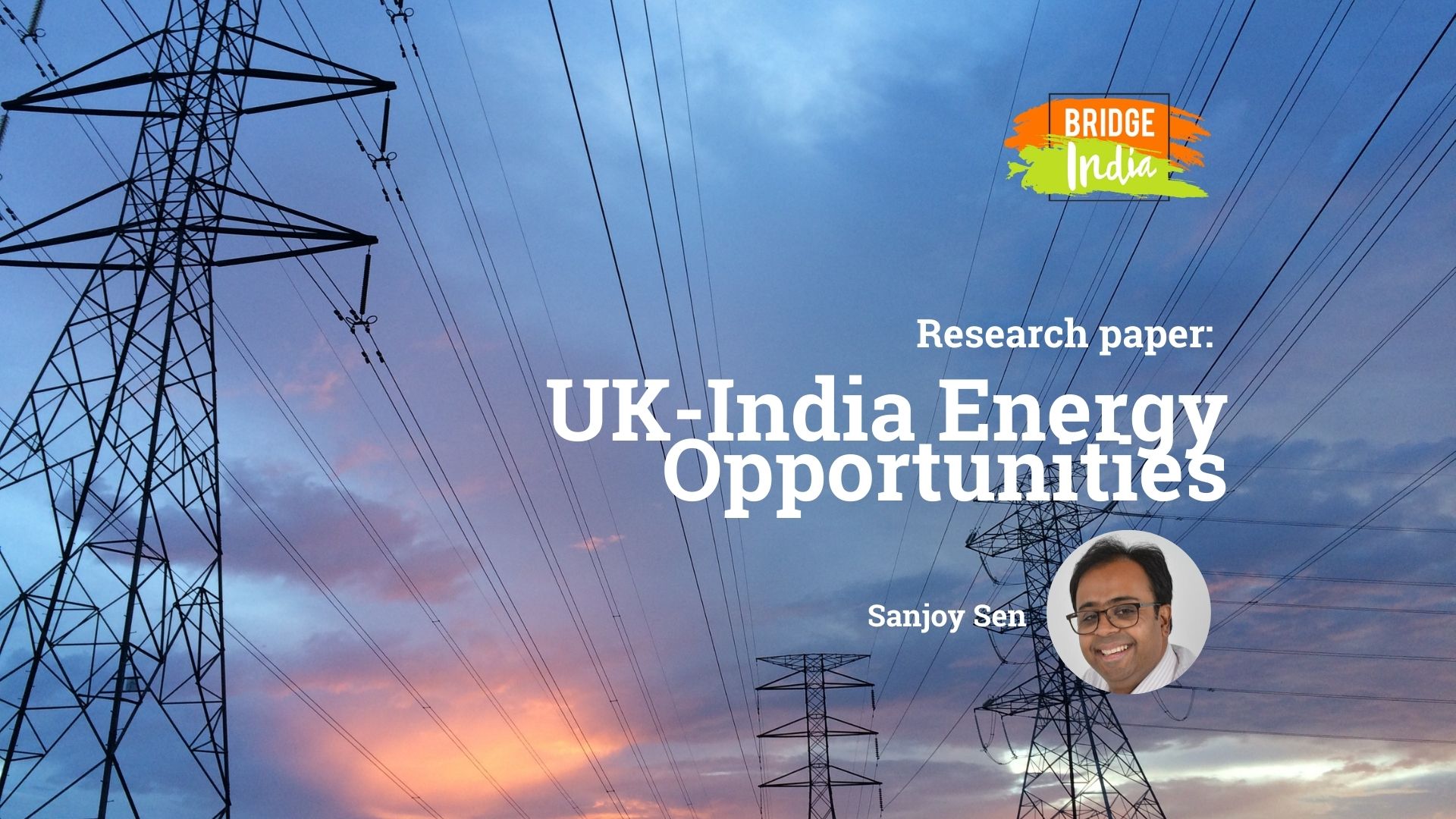 Bridge India will be publishing a research paper on the potential for India-UK energy sector collaboration and we would like your input.

If you are interested in contributing to this report, please fill in this short form and we’ll reach out shortly. We’re interested to hear from practitioners, innovators, investors and others involved in this space.

Sanjoy Sen CEng FIChemE was a Conservative candidate at the 2019 UK general election. He gained over 18,000 votes and came within 200 votes (0.5%) of winning the seat of Alyn & Deeside, North Wales. He is a chemical engineer with over 20 years’ industry experience in the UK and abroad. He also holds an MSc in Petroleum Engineering and attained a distinction in his LLM in Oil & Gas Law. He spent four years at the Oil & Gas Authority, a UK government regulator, where his proposal won £1 million of funding to explore the clean energy transition.

The UK’s record in the clean energy transition is strong and there are many opportunities to work synergistically with India.

As in many developed countries, the UK’s main energy demands are three-fold:

In all three sectors, the UK has been making significant progress to reduce emissions and to de-carbonise. Whilst many activities began some years ago, a greater sense of urgency has been injected by the commitment to deliver net zero greenhouse gas emissions by 2050; the UK was the first major economy to pass such legislation. Furthermore, it is anticipated that clean growth will form a key element of the UK government’s post-COVID economic recovery plan.

Whilst the environment is commonly cited as a key driver of change, the energy transition also potentially reduces the UK’s dependence on imported energy and creates opportunities for technology exports; these can be important political and economic drivers.

The UK is one of the best natural locations worldwide for wind power. It has embraced this opportunity, both onshore and offshore, ensuring that some 20% of electricity is now obtained from wind. The UK already has the world’s largest installed offshore capacity with more windfarms planned; whilst construction takes place locally, most operators and manufacturers are multi-nationals.

The next anticipated major opportunity is in floating offshore technology, allowing turbines to be installed in deeper waters further from shore.

Whilst the proposal for the world’s first tidal lagoon power station was rejected for Swansea Bay (Wales), larger options are being considered elsewhere, including Cumbria (north-west England).

Whilst the UK’s location and size does not lend itself to large-scale solar power, small-scale residential schemes are proving increasingly popular. Encouraged by feed-in tariffs (now withdrawn) and grants, some 3% of UK households have solar panels.

Some 20% of the UK’s electricity is from nuclear. Although no new capacity has been added since 1995, construction has commenced on the 3.2 giga-watt Hinkley Point C power station, jointly funded by France and China. Whilst the UK government remains keen on more nuclear power, funding has proven challenging; in 2020, Horizon Energy (owned by Hitachi) withdrew from the Oldbury and Wylfa projects.

A combination of intermittent electricity generation from renewables and inflexible nuclear output poses new challenges for the UK’s national grid. By converting zero-carbon electricity into ‘green’ hydrogen, this energy can be stored and used inter-changeably for electricity generation, transportation and heating – this creates the highly-flexible hydrogen economy.

The UK’s ITM Power is an early leader in hydrogen fuel-cells and will open the world’s largest electrolyser manufacturing plant (1 giga-watt) in Sheffield. The UK is already exploring hydrogen opportunities but is yet to announce an overall hydrogen strategy as per Japan, Germany and the EU.

The UK government is sponsoring battery innovation via the Faraday Challenge. The discovery of lithium in Cornwall (south-west England) could meet national battery requirements whilst research continues into alternatives, such as Faradion’s sodium-ion unit.

In the 1990s, the UK’s ‘dash for gas’ saw the construction of many, large-capacity CCGT (combined-cycle gas turbine) power stations. Whilst the share of electricity generated by gas has been eroded by wind power, it still accounts for some 45%.

The UK was once self-sufficient in gas but as its North Sea fields have declined, imports now meet half the demand: these are sourced by pipeline from Europe (mostly Norway) and via global LNG shipments. Public opposition to onshore shale gas extraction (‘fracking’) prompted the government to halt activities in 2019.

The UK has almost eliminated coal usage for electricity generation even though significant domestic reserves remain. The government intends to ensure all coal-fired power plants will close by 2025.

Electric car sales in the UK are increasing: in 2020, 5% of vehicles sold were EVs versus just 1% in 2019. The government has stimulated the market with purchase grants (£3,000 for vehicles, £350 for domestic chargers) whilst London’s Congestion Charge and Ultra-Low Emission Zone also encourages drivers to switch. By 2020, the UK had 12,000 EV charging locations; keeping up with demand is proving a challenge.

Japan’s Nissan manufactures the Leaf EV car in the UK; other UK zero-emission manufacturers include LEVC (London taxi), Wrightbus and JCB (construction equipment). Jaguar-Land Rover (owned by Tata) are set to launch a range of EVs and are also researching hydrogen fuel-cells.

The UK’s Department for Transport launched the 2020 First of a Kind (FOAK) competition to accelerate rail innovation. The HydroFLEX project developed between academia (University of Birmingham) and industry (rolling stock provider Porterbrook) involves the conversion of an electric train to hydrogen, allowing routes to enjoy the benefits of electrification without the costs of installing overhead cabling. Vivarail provides lower-cost solutions by re-conditioning rolling stock with new hybrid, battery or fuel-cell hydrogen powertrains.

In 2020, aviation firm ZeroAvia completed the world’s first hydrogen fuel cell powered flight of a commercial-grade aircraft from Cranfield University in the UK. The UK is also one of several European countries that is home to Airbus, the world’s largest airliner manufacturer. Airbus is investigating options for zero-emission flight, both via electricity and hydrogen.

Most UK houses and public buildings are heated by natural gas supplied by via the national pipeline grid network; this accounts for some 20% of the UK’s carbon emissions. The UK is currently investigating two main options for emissions reduction: switching to hydrogen (or a natural gas – hydrogen blend, as piloted at Keele University) or the replacement of boilers with electrically-powered heat pumps. This shift will be driven by the 2025 ban on conventional boilers in new homes.

The Hynet project in north-west England seeks to produce ‘blue’ hydrogen from methane gas at Essar’s Stanlow oil refinery; the resultant hydrogen would be supplied to major industrial users whilst the carbon dioxide generated would be captured and stored in redundant offshore gas fields.

If you are interested in contributing to this report, please fill in this short form and we’ll reach out shortly. We’re interested to hear from practitioners, innovators, investors and others involved in this space.