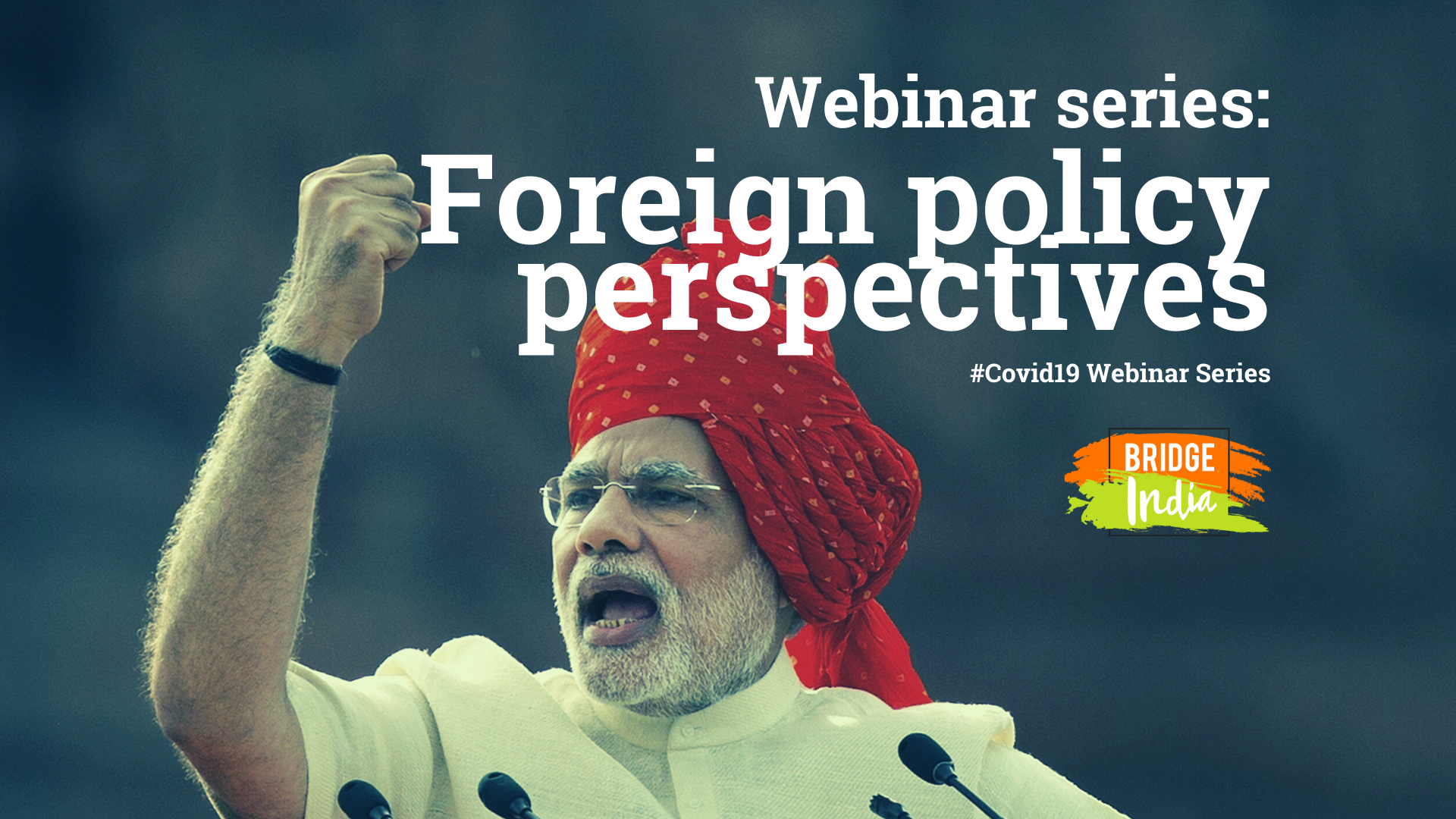 2020 is a pivotal year for India-China relations, with the pandemic and border issues are catalysts for change. Likewise, will the pandemic, Brexit and the upcoming US Elections change global foreign policy dynamics and priorities for India.

We bring you perspectives from India and abroad on the evolution of India’s most important geopolitical relationships.

One Month On: The Biden Administration’s priorities 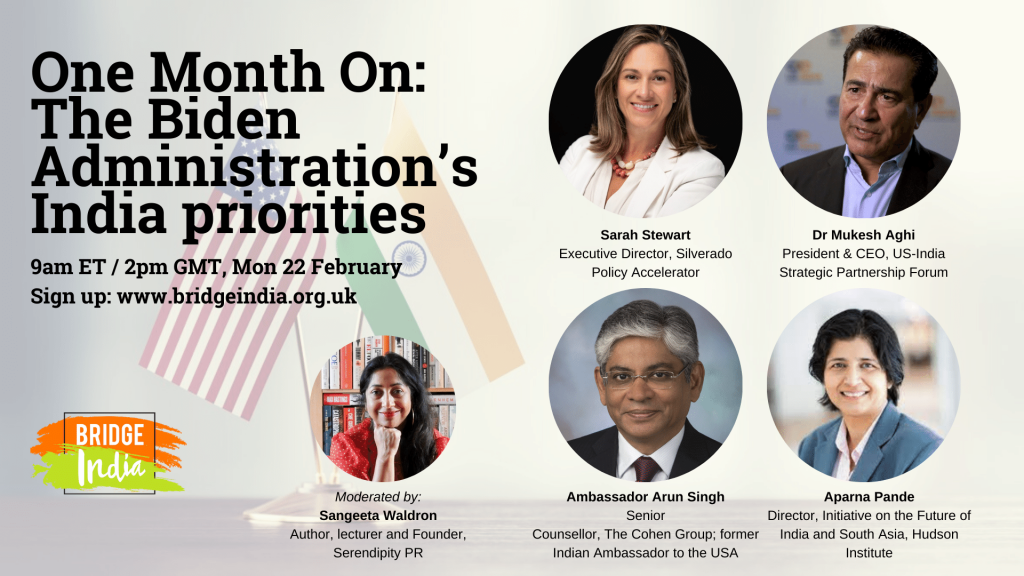 India-US ties were elevated to “comprehensive global strategic partnership” during President Donald Trump’s visit to India in 2020. Just days before the presidential elections in November, the two countries held the US-India 2+2 framework, making India just the second country to have this kind of dialogue, which has become the leading mechanism to discuss issues across the breadth and depth of the relationship.

However, it could also see a realignment of priorities. With India’s increasing concern over China’s growing presence in the Indo-Pacific, and the US also seeking to counter China’s growing global influence, India and the US could further develop a close defence and security relationship.

But overall, a Biden administration would likely be a less abrasive and more traditional partner for India that seeks continuity in deepening bilateral ties, built on a foundation of shared values. The Biden administration has several Indian origin officials in senior positions – more so than the Trump and Obama administrations – which could act as a natural bridge between the two countries. Visas, job creation, startups and tech, energy and climate change, space and more will be on the agenda for discussion as both countries emerge out of the economic downturn caused by the pandemic.

Our session brings together senior stakeholders from the US and India to explore the form this partnership could take over the coming four years.

Linked by common democratic values, India and the UK are two potential partners who can collaborate with each other for a mutually benefitting and exciting future. India was the second largest source of FDI in the UK in 2019 and India-UK investment relationship supports over half a million jobs. Being a major source of investment and employment generation, along with sharing a similar vision of free and open Indo-Pacific based on rules based international order, India can be a reliable economic partner for the UK in its post-Brexit strategy in the Indo-Pacific region.

The region has been in increased focus in India recently, with the development of the Quad, increased Chinese maritime aggression, and India’s refusal to join the world’s largest free-trade area – the RCEP.

At a time when the European countries including Germany and France are formulating their Indo-Pacific strategies, the UK seems to be left behind. Cooperation with India in the Indo-Pacific will not only help the UK economically, but also to position itself as a key player in the dynamic geopolitical and security environment, with opportunities for multi-country partnerships in supply chain resilience, maritime security, trade and investment, addressing climate change and building telecommunication infrastructure.

Given this background and context, this webinar is being organised to discuss India-UK trade and economic cooperation, keeping in mind the recent developments in the Indo-Pacific region.

India-U.S. bilateral relations have developed into a “global strategic partnership”, based on shared democratic values and increasing convergence of interests on bilateral, regional and global issues. Relations between the countries have improved considerably over the last 15 years, having been fraught with mistrust and tension during the Cold War. The bilateral relationship underwent a significant transformation when the US first agreed to ‘work to achieve full civil nuclear energy cooperation’ with India in July 2005.

Today, the desire to counter China’s role in the Indo-Pacific is an area of increasing strategic convergence for the countries. A state visit to India by Trump in late February 2020 was symbolic of an enhanced bilateral partnership and the importance of defence cooperation within it; so much so that there was rampant speculation in India that its pandemic lockdown was deferred by a few days in order to accommodate the visit.

The panel discussion brings in a range of voices, including from the mainstream of the Republican Party in the US, including Oz Sultan, the Indian-Muslim origin Republican candidate for Senate in Harlem. This session is part of an ongoing series from Bridge India looking at Indian public policy from the lens of a post-pandemic world. In the context of the Indo-US relationship, this will focus on a range of issues, including Indian visas in the US, access to the Indian market for US companies as well as what Modi’s Atmanirbhar Bharat means for a more export-focused Trump trade doctrine.

You can watch the recording of the webinar on our Facebook Page here or on our YouTube channel here.

The completion of the first year of the Modi Government’s second term in office presents a good opportunity to take stock of its successes and failures on the foreign policy front. The recent stand-off with China (covered in our other recent webinars here and here) and ongoing tension with Pakistan have led to debates on India’s foreign policy choices. Nepal’s portrayal of a new map of its border with India has also posed a diplomatic challenge India did not anticipate. India’s abrogation of Article 370 and the removal of the special status of the disputed border state of Jammu and Kashmir pushed its diplomatic outreach into overdrive.

On the other hand, one of the notable successes of the government has been its outreach in India’s neighbourhood, beginning with Modi’s visits to Sri Lanka and the Maldives shortly after taking office for the second time. In the US, Foreign Secretary met with five of the leading Washington think tanks in just 72 hours, as engagement with the US increases. While dealing with the pandemic New Delhi has established contacts across world capitals through the provision of medical supplies and other assistance. This soft-power approach has elevated India’s standing in the world.

You can watch the recording of the webinar on our Facebook Page here or on our YouTube channel here.

US and Chinese foreign policy has for long been to embrace China’s integration onto the world stage, but under President Xi, China has displayed greater assertiveness. Foreign Policy magazine said in May 2020 “Xi Jinping’s China is displaying a superpower’s ambition. Only a few years ago, many American observers still hoped that China would reconcile itself to a supporting role in the liberal international order or would pose—at most—a challenge to U.S. influence in the Western Pacific … Now, however, the signs that China is gearing up to contest America’s global leadership are unmistakable, and they are ubiquitous.”

The present phase of India-China relations emerged from the desire and imperative to reset relations after the Doklam standoff in 2017 and the realisation that, despite the persistence of major differences between them, India and China have significant areas of cooperation both in the bilateral and multilateral arenas.

Strained ties with Washington are driving Beijing to reach out to New Delhi, without assurances that it will not revert to a confrontationist posture under different circumstances in the future.

This session follows on from our earlier on the view from South Asia on the future of OBOR and associates initiatives in a post-COVID-19 world. How should India adjust its own position in the world to a situation where China is a much bigger, more assertive country? What is the position of India geopolitically versus a China that is already the largest economy in Asia and, before too long, the world? Does India have sufficient leverage on trade, on providing Huawei access to India’s 5G network, and on border security?

One Belt One Road, CPEC and other Chinese initiatives: Where next after COVID-19? (Monday 18th May)

You can watch the recording of the webinar on our Facebook Page here or on our YouTube Channel here.

The Munich Security Report 2020 sheds light on the phenomenon that it refers to as “Westlessness” – a widespread feeling of uneasiness and restlessness in the face of increasing uncertainty about the enduring purpose of the West. In a multi-polar world, with President Trump riding a wave of economic nationalism, the chosen theme at the Munich Security Conference (the “Davos for diplomats”) was to discuss whether the West was now so divided and challenged by the rise of China that its whole existence had become imperilled.

In dealing with the Coronavirus outbreak, there has been little of the multilateralism and global coordination that perhaps occurred after the Great Financial Crash – at least, as far as optics as concerned.

But with China being battered for the origin of the COVID-19, by politicians in the US, in India and elsewhere, where does this leave China’s ascent on the global stage? The session covers: