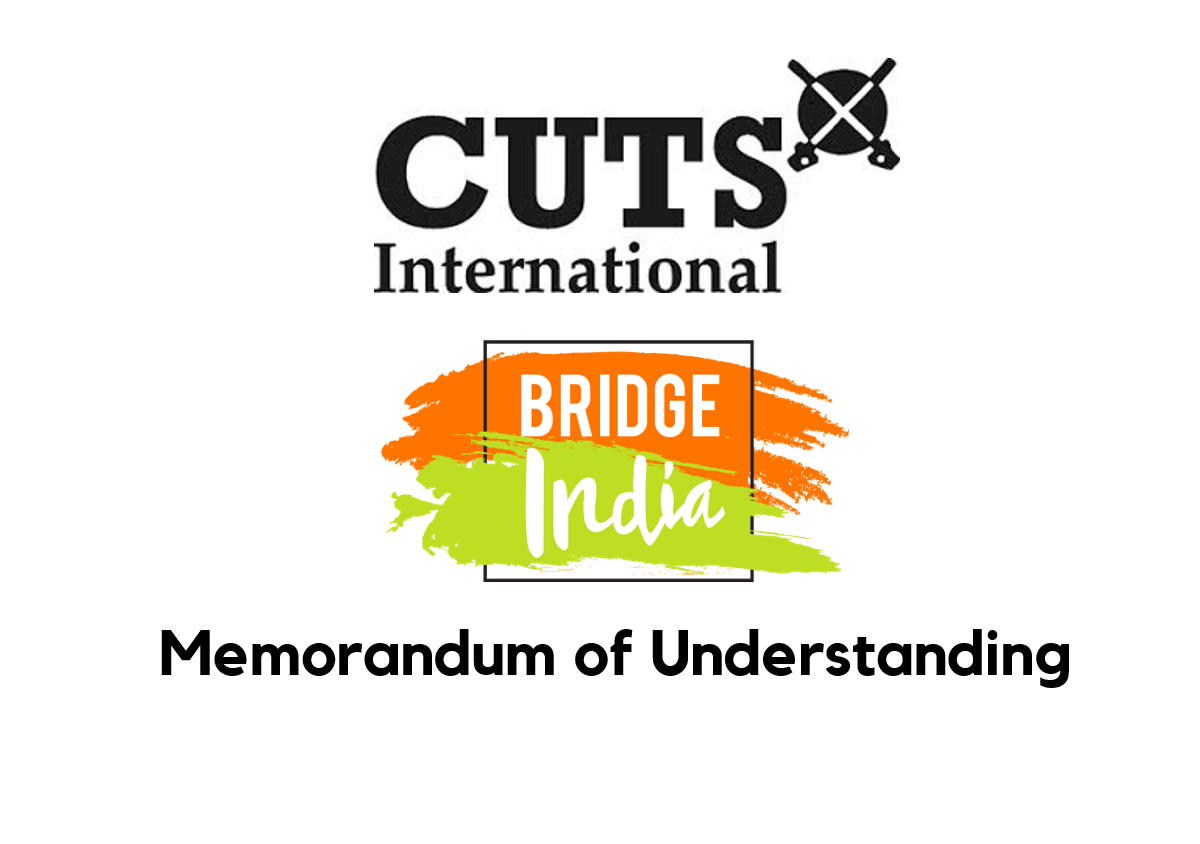 DELHI, 09 November 2020: CUTS International and Bridge India today signed a Memorandum of Understanding with the purpose of promoting potential joint collaboration opportunities to contribute positively to the development of India, in the areas of trade, effective regulations, good governance and consumer protection.

The collaboration will enhance mutual cooperation in the areas of policy research, advocacy, networking and capacity-building. The organisations intend to co-host webinars and events, and collaborate on research and projects.

CUTS International has the strategic goal to champion consumer sovereignty in the framework of social justice, economic equality and environmental balance, within and across borders.

Bridge India is a diaspora-led think tank with the strategic goal to help India-watchers in the UK and Europe understand India and its public policy better.

As the global economy continues to face strong economic headwinds from Covid-19, the shrinking of multilateralism, greater polarisation and a redrawing of traditional geopolitical alliances, both organisations are committed to furthering conversations that help bring stakeholders together to navigate the shifting global landscape.

Bridge India trustee Ashwin Kumaraswamy said: “Bridge India is proud to be an Indian diaspora-led think tank, with its first office in London. We differentiate ourselves by being able to provide deep insights on India and its public policy to diaspora and ‘India-watchers’ in the UK and Europe. This partnership provides an exciting opportunity for us to facilitate further meaningful conversations for our Members.”

Secretary General of CUTS International Pradeep Mehta said: “CUTS International is delighted to enter into an MOU with Bridge India, which will explore a growing role of the Indian diaspora in furthering the cause of the India-UK relationship in particular and their joint future role in the Indo-Pacific region. India and the UK have a number of complementarities in various areas of trade and technologies. Both countries are going to gain from a comprehensive economic partnership agreement, the steps for which are being put into place. Indian diaspora in the UK should play a major role in realising such gains.”

CUTS International: CUTS International (Consumer Unity & Trust Society) began its journey in 1983 in Rajasthan, from a rural development communication initiative, a wall newspaper Gram Gadar (Village Revolution). This monthly wall newspaper is published regularly and has been instrumental in providing a forum for the oppressed classes to get justice. On seeing Gram Gadar, Rubens Ricupero, Secretary-General of UNCTAD (1995-2004) observed: “It confirmed my view that often the simple lack of awareness lies at the root of so much misery”. Find out more at cuts-international.org.

Bridge India: Bridge India is a progressive non-profit think tank dedicated to discourse on public policy. It is a registered charity in England & Wales number 1183696, funded through memberships. The ‘India Story’ abroad is often presented through a narrow lens, be it focusing only on business and the economy, society or policy landscape. Given its diversity, everything about India, and its polar opposite, is true in unison. Bridge India seeks to highlight and celebrate this nuance, to help India-watchers understand India better. Find out more at www.bridgeindia.org.uk.