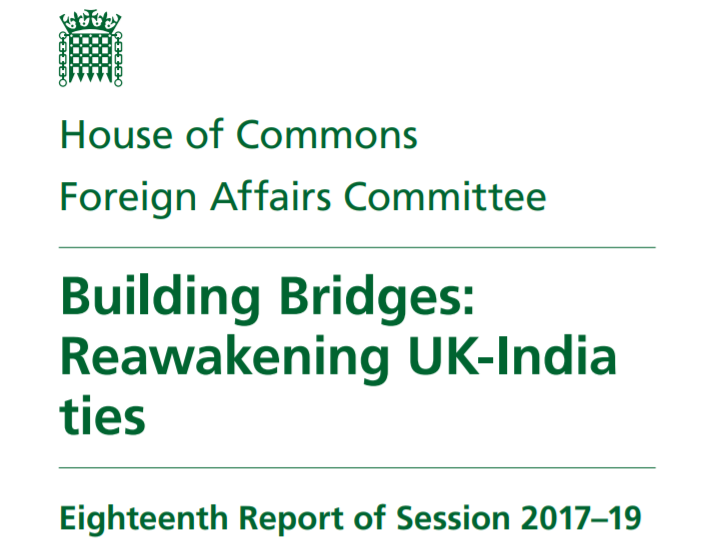 Bridge India is pleased to share with you our recently published submission to the Foreign Affairs Committee’s “Global Britain and India” inquiry.

The Parliamentary Committee set up the inquiry to take stock of the UK’s relationship with India and examine this as an important test case of the Global Britain strategy. Given our remit and mission to creating a bridge between Europe and India, Bridge India offered our insights.

Links to the report

The UK and India have a strong relationship that has grown over time not just because of shared democratic, plural and inclusive values, but also because of a diaspora of nearly 1.5m Indians that act as a bridge between the two countries.

The diaspora are an underutilised resource for Britain and any future economic engagement should seek to make better use of these shared ties. British Indians are in the highest socio-economic groups in the country, with two of the top five spots on the Sunday Times Rich List occupied by members of the diaspora, have low incidence of crime, have integrated well into British society and are increasingly being seen at the highest positions in politics.

Initiatives such as the UK-India Year of Culture are welcome, but lack engagement beyond a small circle of those regularly involved in India-UK matters in London and New Delhi.

A powerful India that shares Britain’s values, including its support for a rules-based international order, is important for Britain’s future prosperity. The two countries have much more in common than some of the other important inward investment partners for Britain, such as China.

But there is a need for a more coordinated approach from the British government in working with India on such mutual goals. Britain must more clearly accord the Indian partnership more importance than it does currently, and at least as much as the China relationship.

While soft and economic power levers of the British government through the FCO, DIT, DFiD and UK Export Finance do promote a closer relationship, the Home Office seems at odds with this approach. There are few, if any, stakeholders involved in bilateral UK-India matters, that do not share concerns about a dogmatic and hawkish immigration policy from the Home Office, including Indian chambers of commerce such as FICCI and CII, British chambers such as the CBI, UK universities and members of the existing G2G forums such as the CEOs Forum and JETCO. There is a risk that the future of the relationship is defined by Brexit.

That these concerns appear to fall on deaf ears is damaging to the bilateral relationship and reflects a short-termism in Britain’s approach, where immigration is ideologically prioritised over a more sober cost-benefit analysis that prioritises mutual prosperity. In an increasingly multi-polar world where democracy and the pre-existing liberal world order are under threat, India stands a beacon of hope. It is in Britain’s interests to promote a more prosperous and stronger India on a global stage.

At least some of these concerns may be about marketing and packaging – Britain may well have a joined-up approach across departments, but it my be about selling this better.

The British visa treatment of Indian nationals had worsened in recent years. For example, the Home Office has excluded India from a list of countries granted an easing of Tier 4 documentation requirements in June 2018, significantly tightened post-study work visas, and Indian visa applicants pay more multiple entry visas than their Chinese counterparts. One of the Migration Advisory Committee’s recommendations in September 2018 was to reduce the bureaucratic requirements of current visa applications should be reduced, but it looks like set to increase. Furthermore, it recommended maintain salary thresholds for Tier 2 visas and to make it easier for SMEs to sponsor, which both look difficult now if an employer has to sponsor the whole family.

The UK’s policy to seek stronger ties with China is sensible, but this approach should not be mutually exclusive with India.

The UK as a strategic partner

During the previous UPA-II government in India and the PM Cameron government in Britain, the UK was one of the India’s top strategic partners. Since the current PM Modi government took over in May 2014, Britain’s relative importance has fallen although Modi and Cameron shared a personal chemistry.

Modi made 30 foreign trips, including to the US, France, Germany, Canada, China and Russia (and even Ireland) before coming to London 12-14 November 2015. He has visited France and Singapore three times since becoming PM, Germany and Russia four times, China and the US five times. There are nine other countries, apart from Britain, where he has visited twice. This itinerary presents a good overview of the importance with which the current Indian administration sees Britain, with perhaps Israel and Japan also ahead of Britain in the pecking order.

By contrast, PM Theresa May’s first foreign trade visit outside the EU was to India. The question of immigration overshadowed that visit.

Current areas of cooperation as identified by the British government (and aligned with its own Export Strategy) are in life sciences, digital industries, renewables energy, education, advanced manufacturing, pharma and smart cities. But the current administration’s focus is not just in such economic opportunities, but on broader matters of international cooperation that contribute to India becoming more assertive on a global stage, such as terrorism, defence procurement, maritime security and cyber attacks.

Building a future relationship should not be defined by Brexit and immigration. To make more of the potential, Britain should focus its energies on engaging the Indian diaspora, on matters of strategic interest to India and of giving India at least as important a footing as China.